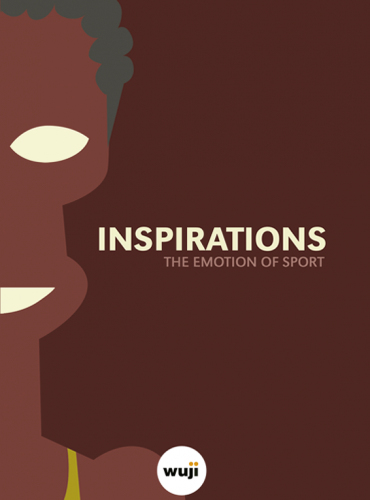 There are sports moments that go beyond competition, that transcend time and become a source of inspiration to others.

The INSPIRATIONS collection presents a set of stories over those moments that pushes the limits of the human beings, their ambitions and skills.
Challenges that regardless age, gender o race, help us to understand the greatness of each one of us is able to keep inside, whether is to conquer an epic victory or accept a heart-breaking defeat.

INSPIRATIONS invites you to dive into the stories details through feelings and sensations that our characters experience during the celebration of a sport event. And it is originally done, a storytelling where the visual impact of the illustration reaches an unusual interest.

INSPIRATIONS is an illustrated collection books, created with the idea of entertaining and fascinating readers of all ages through exciting moments that anyone would dream to star.

In each volume you will find…

• FIRST PART. On 13 double side pages a selected sport event takes places and the story is narrated following the feelings of our character towards the sport event is facing.

• SECOND PARTE. The character of our story is introduced in a double page. If it is a single sportsman or woman, a biographical short profile is shown supported by an innovative design. When the story is about a team, in the same section there is a presentation of the historical development of the team.

• THIRD PART. Finally, a double page is reserved to give some context to the story within a larger framework. In a visual form, as some king of game that grab the reader’s attention, some clues are provided about what was happening the time the sport event took, in terms of political, culture and daily life.

INSPIRATIONS is designed as a12 books collection, expandable to another 18. The main titles of the collection are the following:

The amazing story of Abebe Bikila, who appeared barefoot to run the Olympic Games in Rome.

Until then, no one had reached the perfection in the women’s rhythmic gymnastics. But, Nadia Comaneci managed with an incredible exercise that judges reached to a mutual agreement.

Perhaps it was the result of a joke, or the same weariness that he was always feeling to go for the high jump lath. But whatever happens, when the young Dick Fosbury decided to jump turning his backs to the lath, the audience remained speechless.

Despite having an amputated limb, Natalie Du Toit was determined to obtain the qualification needed to enter the Olympic Games.

5. COMBAT OF GIANTS (Ali vs. Foreman)

9. THE MAN WHO WANTED TO JUMP (Sergei Bubka)

12. WITH THE BALL STUCK (Johan Cruyff)

General characteristics of the collection

Each volume presents an inclusive and conclusive story, combining narrative and visual texts in a special way that has never been seen before.

As many views as public objectives: from the youngest readers to the most veteran readers, they will be able to enjoy these stories.

Stories that defend values such as respect, cooperation, friendship, competitiveness, coexistence, justice, struggle for equality and expression of feelings.

A cross-sectional collection that allows not only to expand indefinitely but also to group them thematically as celebration events as different such as the celebration of the Olympic Games, the Pan American Games or the World Cup itself.

Scroll back to top